The fusion of technology and art is something Walt Disney had a hand in originating, and his ingenuity revolutionized animation. You might know that Snow White and the Seven Dwarfs was the Disney’s first animated feature film, but what you may not know is that its success and subsequent proceeds were used to purchase 51 acres of land in Burbank to conceive and construct a studio dedicated to making animated films. 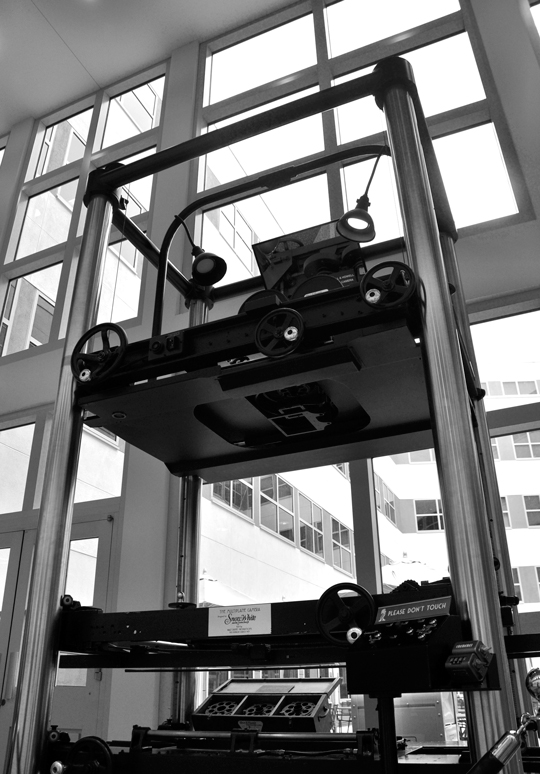 Always striving to enhance the art of storytelling through technology, Walt’s many accomplishments include the multiplane camera (used in the production of Snow White and the Seven Dwarfs), the synchronization of sound with animated images, the use of storyboards and the development of a new type of optical printer. 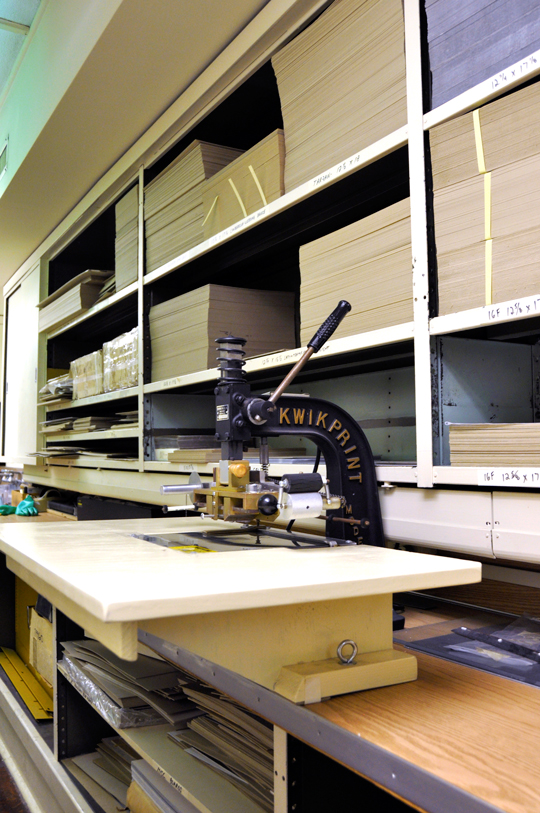 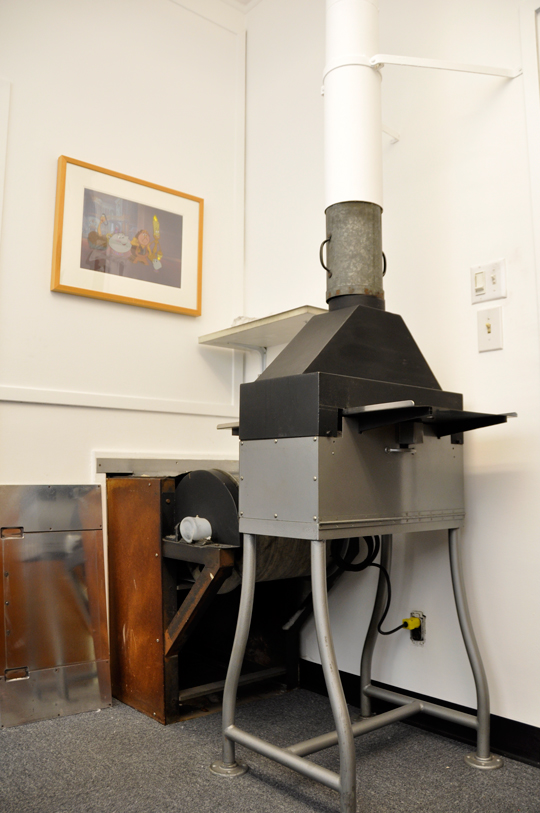 Continuing Walt’s legacy, the studio is guided by the philosophy that art informs technology and technology inspires art. The vivid imagery you see displayed on-screen today is the result of inventions like Deep Canvas and state-of-the-art digital techniques used to create hand-drawn animation. Even in an age of CG animation, the studio is constantly pushing the bar, testing the limits and blurring the lines between imagination and reality. 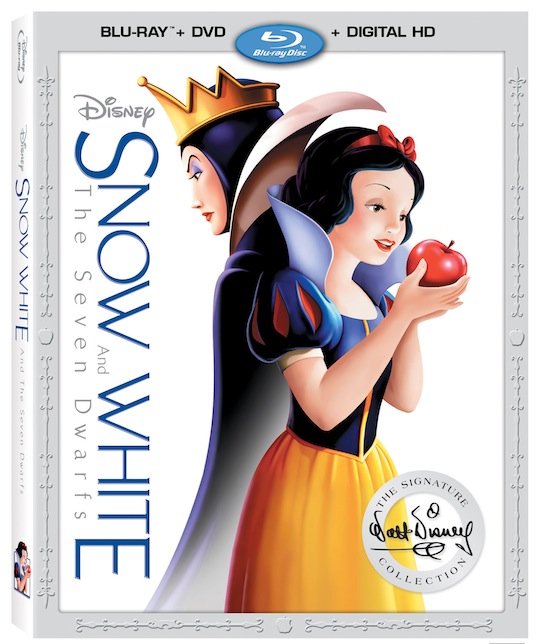 Snow White and the Seven Dwarfs, deemed The Greatest Animated Movie of All Time, will be released for the first time ever on Digital HD and Disney Movies Anywhere and High Definition Blu-ray on February 2nd, 2016. In anticipation of the release, I spent a day at Walt Disney Studios in Burbank for a look back in time at the history of Disney’s Ink & Paint Department. 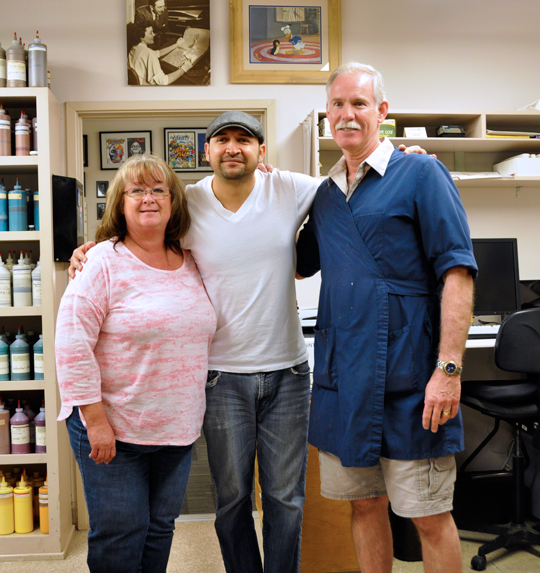 Prior to today’s computer-generated imagery, artists just like Assistant Supervisor of the Ink & Paint Department Sherri Vandoli would ink cels with precision before painting and then carefully adding a touch of rouge to Snow White’s cheeks or tipping a fleck of dust onto a fairy’s wings with a brush no larger than the size of a pin. 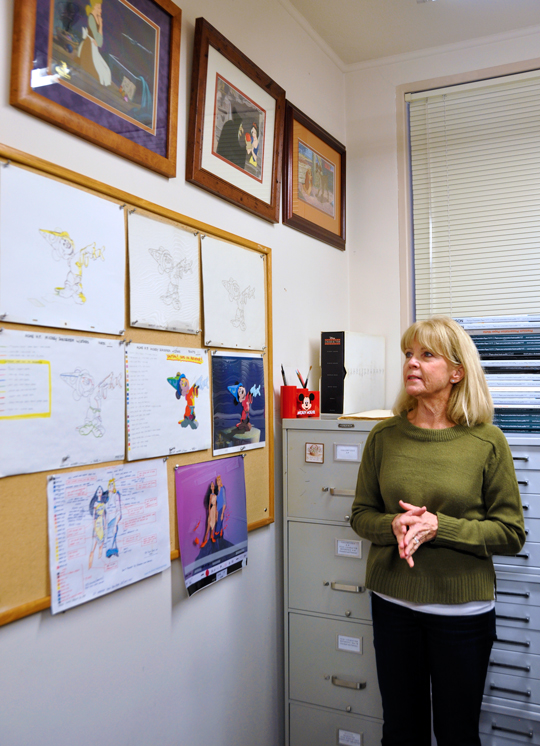 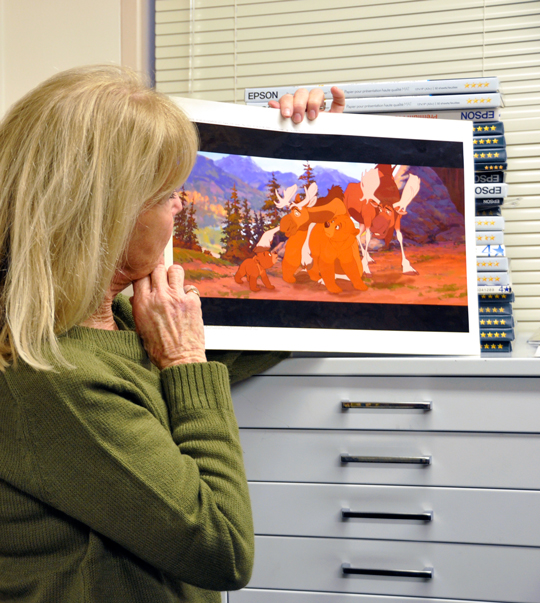 This meticulous approach to animation was used by the artists of the Ink & Paint Department for over 70 years, as line by line, stroke by stroke, the characters and their worlds were brought to life. 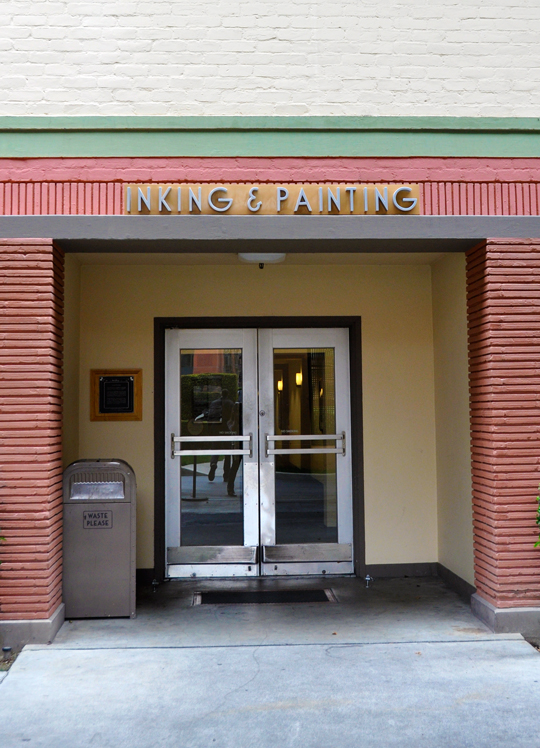 While computers now generate the images you see on-screen, the artistry of Disney’s Ink & Paint department endures through limited-edition artwork created on-site. These pieces are sold and collected across the globe, connecting the collector to the film and its legacy. 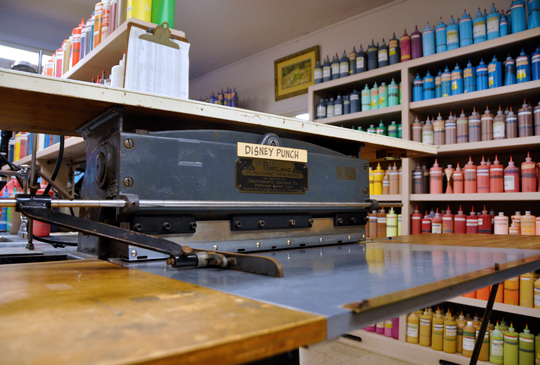 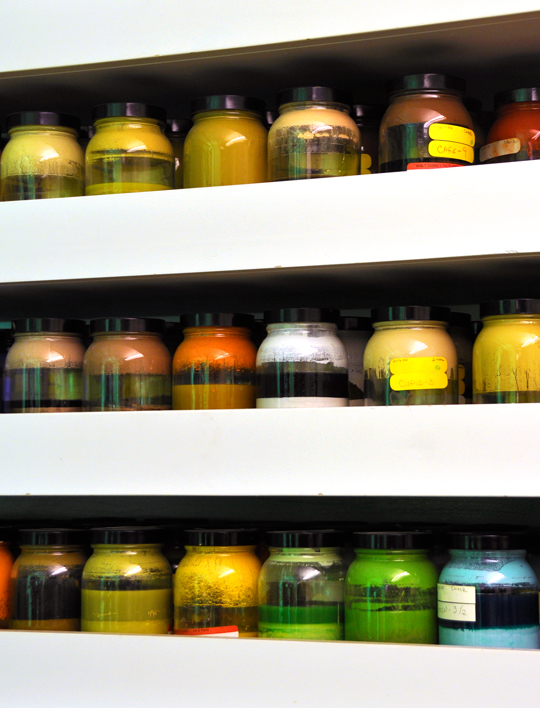 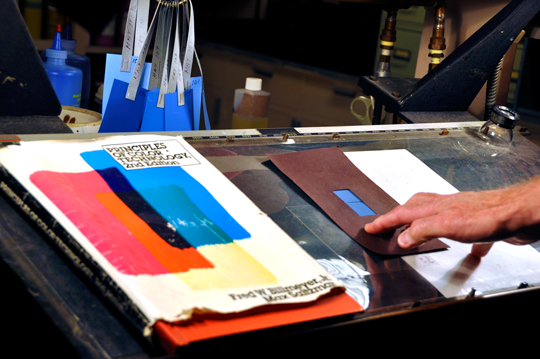 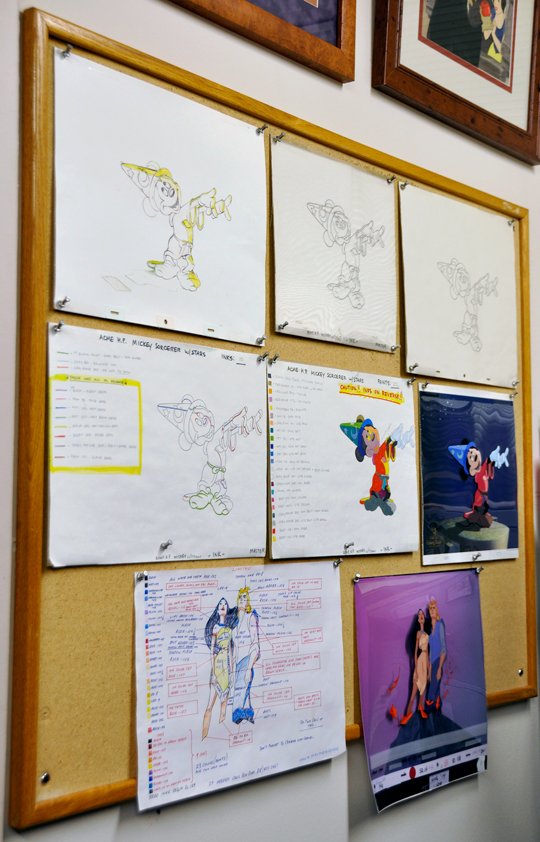 As we entered the Ink & Paint Department, I was struck by a sense of nostalgia, a simpler time where paint and paper converged into cinematic masterpieces. Paint in a rainbow of colors lines each wall, a vintage-looking, well-read Principles of Color Technology book sits on a table as reference, and drawings in various stages of the ink and paint process can be spotted throughout the paint mixing lab. 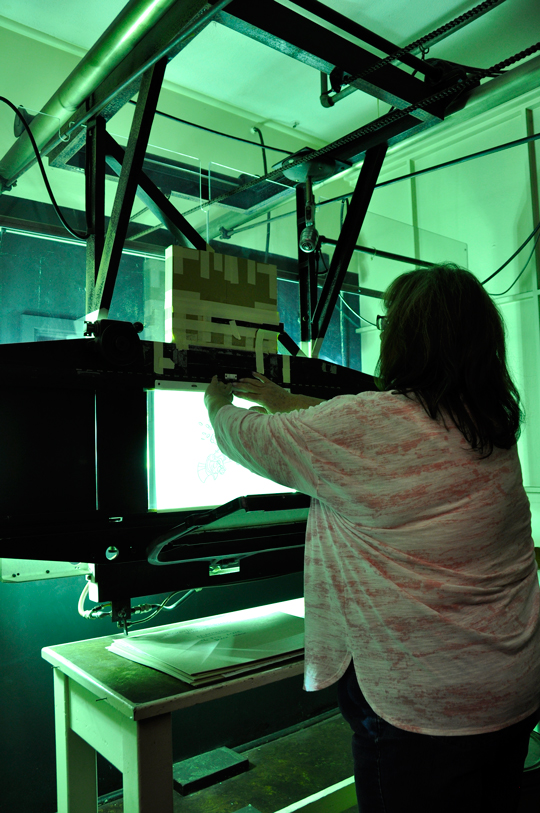 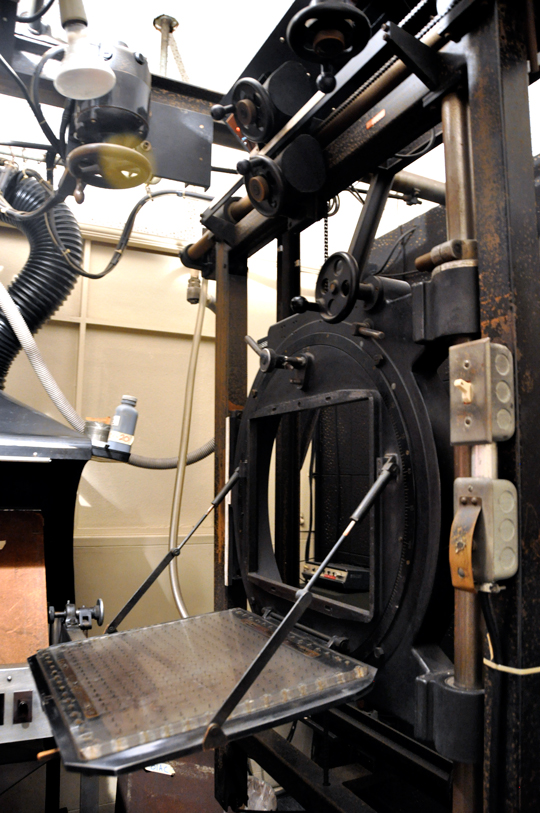 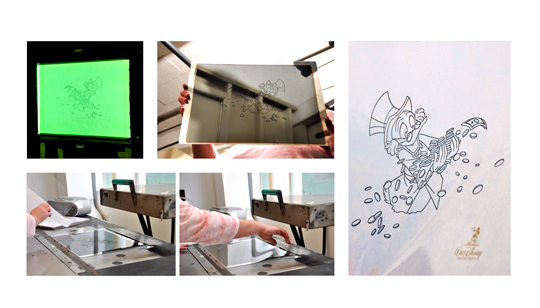 We begin our walk through the ink and paint process at the Xerox camera, which was created to streamline some of the more intricate and time-consuming inking involved with animating cels. This camera/photocopier, which is still used today, transferred the artist’s actual lines to the final cel. Of interest, 101 Dalmatians was the first film to be completed with this technology and The Little Mermaid was the last, which showcases just how quickly technology has advanced. 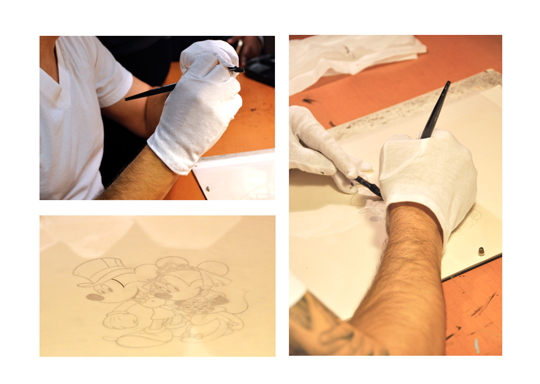 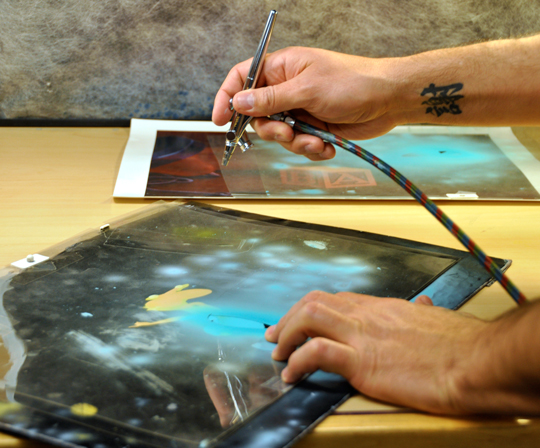 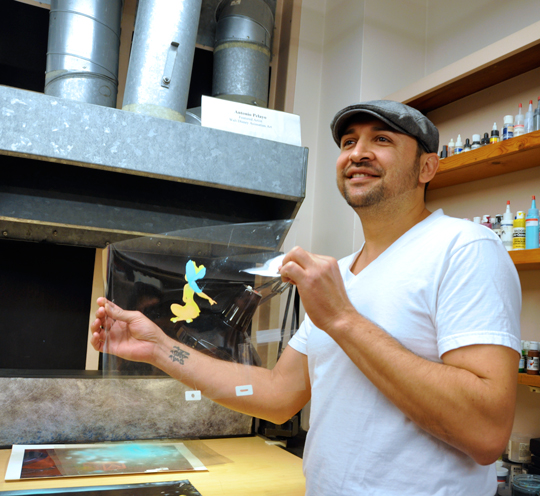 Once the image transfer is complete, artists like Antonio Pelayo line the image, then apply paint to the back of the cel so the line work is undisturbed. To complete the cel, Pelayo adds details and special effects using a stencil and an airbrush. Despite Pelayo’s seemingly effortless demonstration of this process, he is a rarity in the industry and one of the few men specializing in the art of inking and special effects painting. 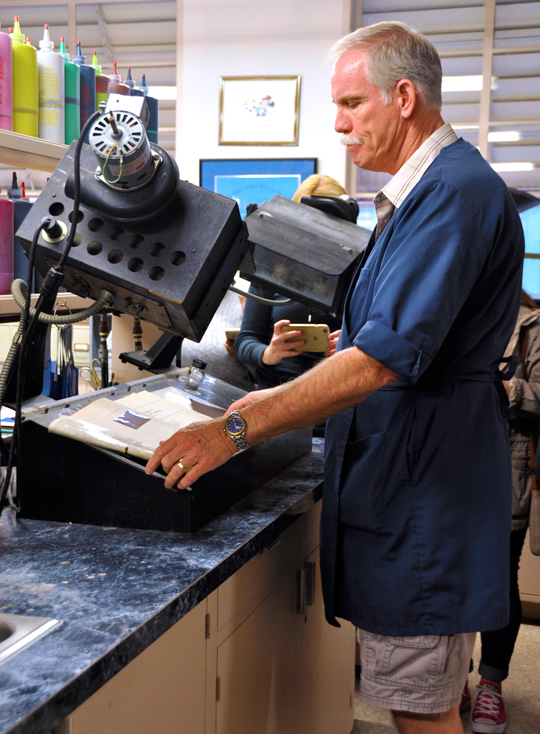 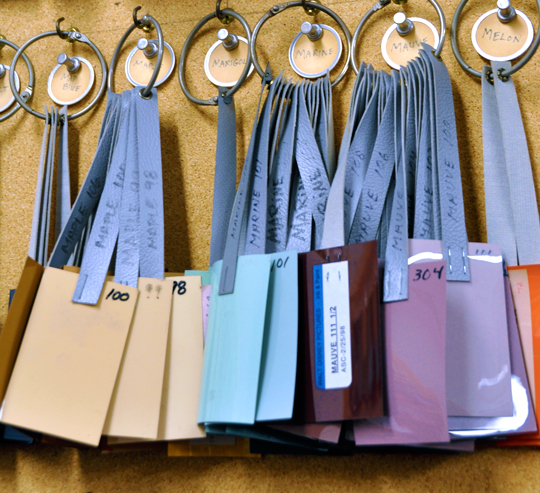 A walk through the Ink & Paint Department wouldn’t be complete without commenting on the paint used during this process. Assistant Paint Lab Supervisor Jim Lusby oversees the mixing, blending and inventory of paint housed at the studio. With over 3800 colors, his job includes working together with the artists to choose specific colors based on the original recipe cards on file. At one time, all paints were custom-made at the studio lab, but the gum-based resin paint used took up to 8 hours to dry. A fast-drying paint was used for the first time in the production of Oliver & Company, and while the material used for this paint is purchased outside, all of the mixing and matching is still done in this lab and matched against the master chip for accuracy. 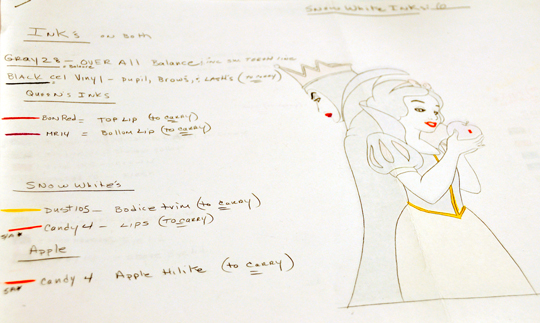 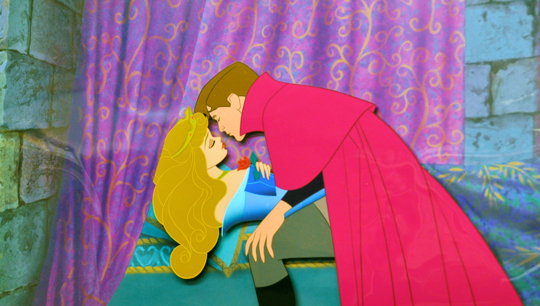 Walt’s forward-thinking approach is consistent with Walt Disney Animation Studios’ continued pursuit of technological advancement in filmmaking. But this homage to an art form that created such treasures as Snow White and the Seven Dwarfs is integral to fusing a connection between the history and artistry that formed the building blocks of the studio that continues Walt’s legacy.

One Response to The Ink & Paint Department at Walt Disney Animation Studios: Preserving an Art Form