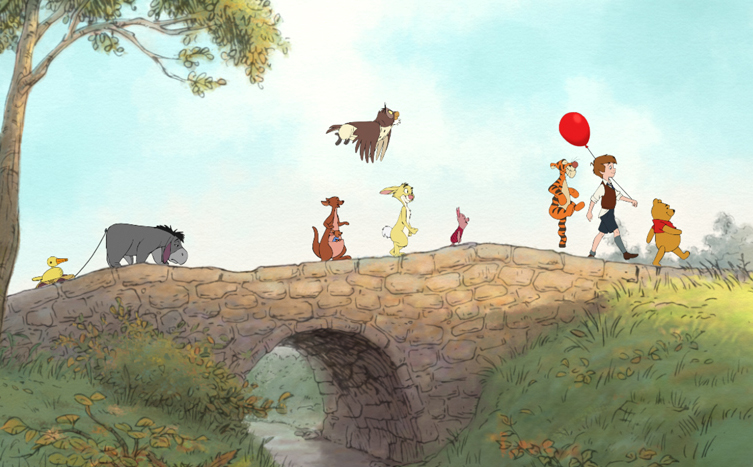 Winnie the Pooh holds a special place in my heart.  He is the honey-loving bear I grew up with as a little girl, and to this day, holds his place as my favorite Disney character.  On July 15th, Walt Disney Animation Studios will release Winnie the Pooh.  Did you know that it’s been more than 35 years since the last big-screen Pooh adventure?  The film, which was inspired by three stories from A.A. Milne’s books in Disney’s classic, hand-drawn art style, is simply adorable.  Adults and children alike will enjoy the reuniting of friends in the Hundred Acre Wood as they endeavor to find Eeyore’s tail.

My children will see the film over the weekend, and I’ll be back next week with a full review including interviews with some of the cast, drawing and watercolor computer demos, and more.  But I couldn’t wait to share the voice-over we did as part of the press junket. I’ve always wondered what it would be like to be the voice of an animated character…really!  I had so many questions like…How many takes are required for a scene? How does an actor get into character?  Are the voices recorded separately or together? Under the direction of Peter Del Vecho (who produced Winnie the Pooh), script in hand, I played the voice of Piglet for just a few short minutes. Exciting right?  Take a look at how a voice recording might take place in a studio…Notice how I’m holding a stuffed version of that cutie to “find my inner Piglet.”

Despite the fact that I was incredibly nervous, I am so glad I did it.  I have an incredible memory to take away from that weekend thanks to Disney. You can visit Winnie the Pooh on Facebook!

Who is your favorite character from the Winnie the Pooh books?  Have you ever wondered what it’s like to voice an animated character?

No compensation was received for this post. I was invited to a media event by Disney and travel expenses were provided.

4 Responses to A Very Special Clip From Winnie The Pooh